The Bouwinvest Dutch Healthcare Fund has acquired 42 assisted-living apartments in the Julianakwartier (Juliana Quarter) project in Apeldoorn in the eastern Netherlands from developers Explorius Vastgoedontwikkeling and Nijhuis Bouw. Most of the homes will be rented at mid-market rental levels to seniors living independently with specialist care requirements. 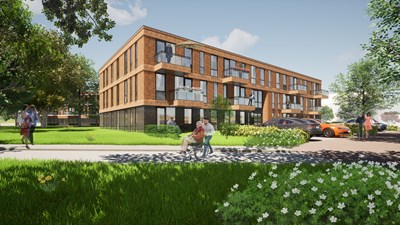 The care apartments are spread across two buildings in the Julianakwartier, which is located on the nothwestern edge of Apeldoorn’s town centre. Bouwinvest previously invested in 106 homes in the same district for seniors with more demanding care needs and which also cater for the disabled.

One of the buildings will accommodate a multifunctional meeting space and a hospitality host will be appointed to liaise with residents. The second  building will house a commercial space rented by the municipality of Apeldoorn on behalf of Samen055, a social welfare agency where local residents can ask questions relating to health, children, education, work, finance and general care.

The project is being developed by Explorius, a subsidiary of Nijhuis Bouw, who realised the apartments at higher sustainability standards than required by Dutch Nearly Energy-Neutral Buildings (BENG) regulations that came into force for new builds in January 2021. The investment therefore already achieves Bouwinvest's goal of achieving a net carbon neutral portfolio by 2045, five years ahead of the Paris climate accord target.

Marco Spekreijse, Deputy Director of Real Estate Development at Explorius, said: “We took a slightly different course than originally envisaged with this development. Unfortunately it was not feasible to develop a comprehensive primary care centre as initially planned, but the combination of the 42 care apartments with the Samen055 agency meets an urgent need in the local community. This project marks the final step in the transformation of the former Juliana Hospital at the site into the new Julianakwartier residential area where housing and care are combined for a range of social target groups."

Solving the shortage of  homes for seniors in the Netherlands

The Netherlands faces an estimated shortage of 850,000 homes by 2035 and demand is growing for more accommodation for seniors with, or without, care-related needs. Bouwinvest called on municipalities and care institutions earlier this year to tap the ‘moral money’ available from institutional investors, such as pension funds, to create more suitable housing for the elderly.

Erwin Drenth, Director of Dutch Healthcare Fund Investments at Bouwinvest, said: "Suitable housing for seniors is a major social challenge. This group is expanding rapidly in the Netherlands and people are living longer as well. Bouwinvest can have both a social impact and generate stable returns for the pension fund clients we represent by investing in these types of assisted living apartments.”