The Bouwinvest Residential Fund has acquired 212 of the 292 apartments in Binck Blocks, a new sustainable residential tower in The Hague, from Dutch developer VORM. More than half – or 121 - of the apartments in the 130-metre-high tower will target the mid-range rental segment. The project is part of a large-scale area development in the former Binckhorst business park which is being transformed into a mixed-use urban district in the coming years.

Binck Blocks is located on the Binckhorstlaan near the entrance of the Rotterdamsebaan road tunnel. This new landmark is being constructed according to higher-than-average sustainability standards and the apartments will be virtually energy neutral. The residential tower will be connected to an area-specific smart grid that energy provider Eneco is rolling out and operating in the Binckhorst district and which will  reduce CO2 emissions and improve the overall level of sustainability in the area. In addition, VORM is using recycled concrete for the construction of the Binck Blocks tower in line with circular production methods aimed at curbing carbon emissions.

Michiel de Bruine, Director Dutch Residential Investments, said: "Bouwinvest is committed to Real Value for Life which means ensuring that our asset management contributes to a sustainable, liveable, accessible urban environment while improving pension benefits. Binck Blocks is a perfect fit with our strategy. It not only provides affordable housing in a large-scale area development near the centre of The Hague, it has above-average green credentials." 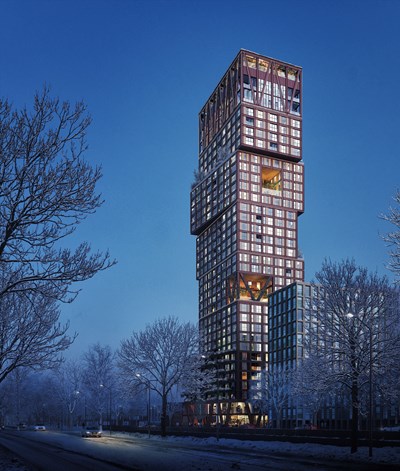 The Binckhorst district will accommodate 10% of the 50,000 new homes that are due to be built in The Hague by 2040, Hans Meurs, Managing Director of VORM, said:

"VORM is playing an important role in this project. We stand for affordable, sustainable homes while maintaining a high level of quality. Our housing projects are enabling the municipal authorities to retain middle-income earners in the services sectors that are so essential for the city such as care, transport and education. Binck Blocks will also help make this possible."

What makes Binck Blocks special is that it will be part of a new vertical urban district with a large number of collective spaces and neighbourhoods with their own identities, Meurs added. "These amenities will make the residential tower very suitable for young professionals, families, seniors in the 50+ age bracket and expats who enjoy a 'Brooklyn'-style environment. Binck Blocks is really something new."

Construction is scheduled to start in 2021 and is expected to be completed in the third quarter of 2024.