Bouwinvest secured the prize for best institutional investor in Alternative real estate sectors at the IPE RE Global Conference & Awards 2019, which were held at the Krasnapolsky Hotel in Amsterdam in mid-May. Bouwinvest won the award for its investments in niche markets such as healthcare real estate and student housing, both in the Netherlands and internationally. Stephen Tross, Chief Investment Officer International Investments, accepted the prize on behalf of Bouwinvest.

Alternatives Award
With the demographic profile of the population becoming increasingly older, healthcare real estate is emerging as a huge long-term growth market. The quality of accommodation is also developing as a key selling point as people are increasingly asking for solutions that combine both care and living. Bouwinvest also invests in the rapidly expanding student housing market, which in the Asia-Pacific region is being underpinned by growing demand from the emerging middle class. Bouwinvest is applying its international experience with student accommodation in the Netherlands, for example in Amsterdam, and we believe both the global and Dutch markets will mature in coming years, so student housing will no longer be considered a niche sector, possibly over the near-term. 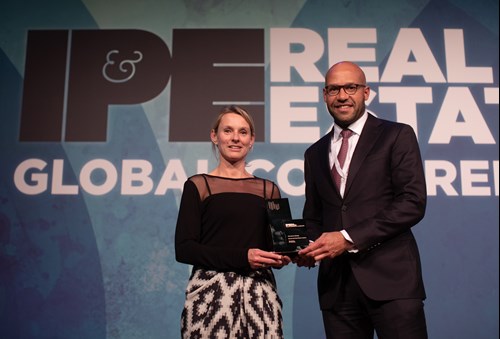 Participation in panel
Prior to the awards presentation and on behalf of Bouwinvest, Stephen Tross took part in a panel discussing which cities investors should or should not consider. Tross argued that the attractiveness of a real estate investment is determined in the long term not only by economic and demographic aspects, but also by such factors as liveability, sustainability and infrastructure. More than half of the conference attendees indicated that quality of life should be the most important criterion for an investment in an international city.

According to Tross, cities are now more important than countries for real estate investors -- and often even specific areas within cities. “The most promising cities for real estate investors with a long-term vision must strike a balance between good densification, sustainability, a well-functioning infrastructure and a visionary city municipality and leadership,” he said. “In addition, the local authorities need to be able to manage growth.”