Bouwinvest Residential Fund has acquired 99 apartments in the NEXT project located in the popular Strijp-S neighborhood near the High Tech Campus in Eindhoven and the city centre from real estate developer Spoorzone, part of Dutch construction company VolkerWessels. 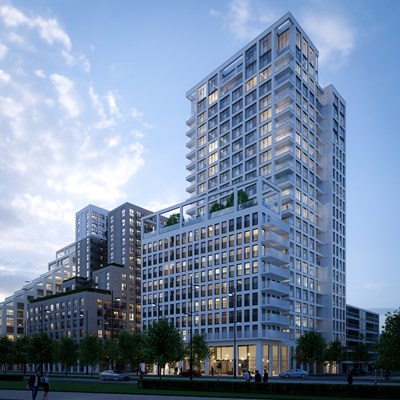 The acquisition follows hard on the heels of Bouwinvest’s purchase of 139 apartments in another development in the nearby Oud-Strijp area earlier in November. Bouwinvest is targeting the private rental segment with both acquisitions.

NEXT is a new residential tower with a total of 158 apartments including 56 apartments and three penthouses for private sale. Strijp-S is a former factory complex of Dutch electronics giant Philips which is being transformed into a lively business and residential district. Bouwinvest already owns 96 apartments in the BLOK61 building in Oud-Strijp. Both NEXT and BLOK61 were developed by Volker Wessels unit SDK Vastgoed on behalf of Spoorzone.

Bouwinvest Residential Fund focuses on the urbanised conglomeration in the west of Netherlands, the leading cities in the province of North Brabant, which include Eindhoven, and the eastern cities of Arnhem and Nijmegen.

Michiel de Bruine, Director of Dutch Residential Investments, said: “Eindhoven is one of the most important economic growth hubs in the Netherlands and it is no coincidence that we want to continue to expand there in these up-and-coming residential areas. We expect demand for housing will only increase."

Ferdinand Gremmen of SDK Vastgoed (VolkerWessels), said: “The NEXT development will incorporate an attractive design with a living concept that will appeal to a large target group that is ready for the next step in their living career."

Construction is expected to start by the end of the year or early 2020 by contractor Stam + De Koning Bouw.